Outsport: a match for inclusion on ‘Sport and Citizenship’ magazine 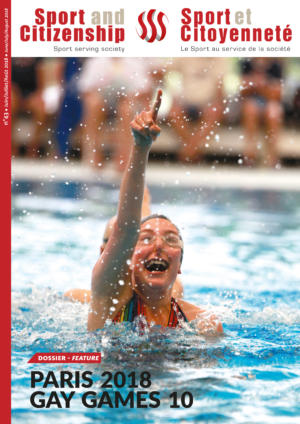 Sport and Citizenship is an indipendent European Think Thank created in 2007, whose social objective is the analysis of sporting politics and the study of sport’s societal impact. its bilingual magazine (english/french) gave space to Outsport in the August number dedicated to Paris GayGames 2018.

We thank Sport and Citizenship for its attention and integrally reproduce here the article for our readers. 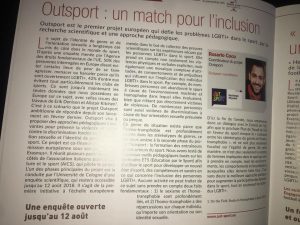 Outsport: a match for inclusion

The topic of gender identity and sexual orientation has been largely ignored in the field of
sports for a long time.
According to the Fundamental Rights Agency of the European Union, (FRA EU LGBT
Survey 2012 ) 50% of a base of 90.000 in Europe avoid certain places or locations for fear
of being assaulted, threatened or harassed because of being openly LGBTI. 42% of them
avoid in particular sports clubs. This is the only data we have about Europe (See also
Denison & Kitchen, 2015 ).

This is the scenario the Outsport project has been addressing since February 2018.
Outsport– “Innovative and educational approaches to prevent violence and tackle
discrimination in sport based on sexual orientation and gender identity” – is co-financed by
the European Commission through the Erasmus Plus program and is promoted by the
Italian grassroots sport association AICS (Associazione Italiana Cultura Sport), the
German Sport University of Cologne, LEAP Sports Scotland, VIDC (Vienna Institute for
International Dialogue and Cooperation) and FRIGO (Organization for Fresh Ideas) from
Hungary.

One of the main tasks of Outsport is the scientific survey promoted by the University of
Cologne , which will be open until August 12th. The survey is open to LGBTI people in all
the 28 EU countries who are older than 16, regardless of their involvement in sports. This
is the first initiative at European level to gather scientific evidence on the experience of
LGBTI people in sports, regarding not only explicit physical and verbal violence, but also a
complex framework of attitudes, behaviours and prejudices that influence LGBTI people’s
participation in sports. For instance, many people gave up sports because of a machista
and homophobic environment around them, even if they were not directly targeted.

It should also be mentioned that many people are victims of discrimination just for their
perceived sexual orientation – for example many men are considered gay for their
“feminine” behaviours. “You run like a sissy” is something we often hear in many
grassroots football grounds referred to both homosexual and heterosexual men. On the
other hand, many heterosexual women who practice sports are often considered lesbians
and get marginalized because they “dare” to be “male”.

This happens because homo-transphobia is strongly grounded on gender stereotypes.
This introduces the second main task of the Outsport project, the training of trainers and
sport operators. We experimented new pedagogical tools based on ETS method
(Education Through Sport) in order to use sports activities as a tool to develop attitudes,
skills and knowledge regarding LGBTI people’s inclusion. No activities can deal with this
topic without assuming two main facts: 1) the deep connection between sexism and homo-
transphobia, 2) the evidence that homo-transphobia affects everybody, regardless of their
sexual orientation or gender identity.

At the end of the project we aim to start a dialogue with the Working Party on Sport of the
Council of the European Union in order to make the next European Work Plan for Sport
focus on the “contrast of homo-transphobia and gender stereotype”, and not just on

“gender equality”. In this case, what needs to be considered is not only the number of
women involved in sports, but the environment, the behaviours and the prejudices they
have to face. This is probably the best political approach to icrease women’s participation
in sport and support LGBTI people as well.